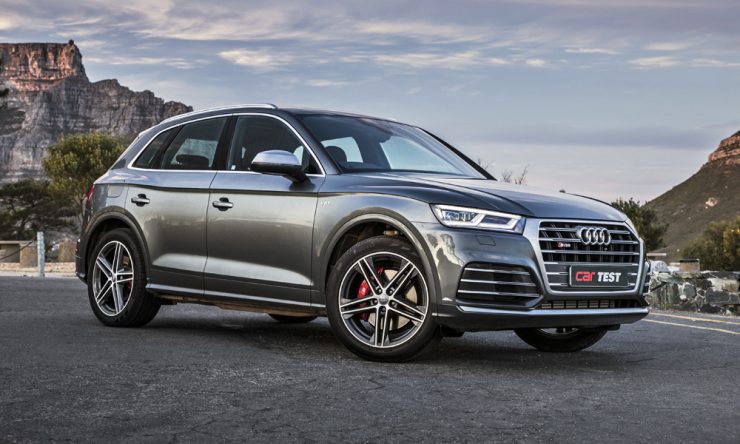 It might not be light, low to the ground or have only two seats, but the SQ5 is perfectly pitched at its target audience…

When Audi launched the first-generation SQ5 back in 2013, eyebrows were raised at the prospect of this premium compact SUV and its athletic aspirations. Under the bonnet lay not a high-revving petrol engine mated with Audi’s slick S tronic dual-clutch transmission, but a grunty 3,0-litre biturbo-diesel feeding power to all four corners via a torque-converter slush ‘box. The naysayers, however, were proven wrong and it found success not only globally, but also here in South Africa.

Fast-forward a few years and the idea of a performance compact SUV suddenly isn’t far-fetched. Porsche has the Macan S, GTS and Turbo, Jaguar the F-Pace in supercharged V6 guise, BMW’s just launched the X3 M40i and Mercedes-AMG would happily sell you a GLC43 (and, soon, a GLC63). It’s therefore the opportune time for a new SQ5 to debut.

Don’t expect more of the same from the flagship Q5, however. This time round, Audi South Africa has launched the SQ5 with a V6 turbopetrol (there was a supercharged one in the previous range, but it was never offered here). That means the new SQ5 perfectly matches its key competitors, which all use petrol power, but has the shift from diesel dented what made the previous SQ5 so appealing?

Let’s tackle the biggest alteration first – the engine. The 3,0-litre V6 unit under the fluted bonnet employs a twin-scroll turbocharger that sits between the 90-degree V of the cylinder banks, allowing for a more compact design and, Audi claims, minimal flow losses. That, in turn, should enhance response. Ingeniously, the V6 uses variable timing and valve-lift technology to operate more efficiently under part-load by effectively shortening the induction stroke and running a higher compression ratio.

Playing its part, too, in imbuing the SQ5 with an instantaneous burst of power at lower speeds is the reconfigured eight-speed automatic transmission, which utilises short gearing on the lower ratios to negate the effects of turbo lag and longer spreads on the higher gears for improved efficiency at a cruise.

And, as you’d expect from a modern-day, S-badged Audi, the combination of a slick drivetrain and a grippy Quattro all-wheel-drive system with a slight rearward torque bias means the SQ5 has a brutally efficient turn of speed. Despite weighing nearly two tonnes and lacking a launch-control system, on our test strip this model leapt off the start line and hit 100 km/h a mere 5,72 seconds later. In-gear, it was very nearly as quick as a VW Golf R.

Scroll through the Drive Select adaptive-dynamics system from comfort and auto to sport, and the soundtrack matches that performance. It must be said though, a lot of what you hear inside the cabin is enhanced and then filtered through the speakers; passers-by get a more authentic taste of the V6’s warble.

The eight-speed transmission does a commendable job of intuitively flicking through the ratios, but it won’t hold on to a gear at the red line. That, however, is nitpicking; it’s a brilliantly creamy powerplant that’s no less effective than the previous 3,0 BiTDI (although it is heavier on fuel).

In terms of underpinnings, the new Q5 sits on the VW Group’s MLB Evo platform that’s shared with the current A4 and VW Passat. It’s lighter than the previous chassis and, on the SQ5, boasts the addition of a sport differential aimed at curbing understeer. This test vehicle lacked the optional air suspension system (with specific tuning for the SQ5; it costs R13 500), but seemed not to need it. Thanks to electronically controlled variable dampers, called Continuous Damping Control and supplied by German company ZF, the SQ5 manages to smother the sting of road bumps and bruises while maintaining a mostly even keel when attacking a string of bends. In sport mode, however, the steering turns leaden; it’s best to leave the system to its own devices in auto mode, or adjust the various parameters of the dynamics in the individual setting.

In terms of design cues, the SQ5 is differentiated from run-of-the-mill Q5s by the addition of specific air vents at the front, a matte-grey grille with double aluminium slats, signature S silver door mirrors and a bright diffuser-like panel aft containing faux exhaust tips. It’s all typically understated, but the carmaker does offer a titanium styling pack (R7 700) and 21-inch Audi Sport alloy wheels (R21 600; 20-inch items are included in the price) if you’re feeling more daring. LED headlamps and a full suite of parking aids are standard.

Inside the class-leading cockpit – its perceived quality is first-rate and space all-round generous – the SQ5 gains illuminated doorsills embellished with S logos, contrasting stitching and S sports seats, in the case of this test vehicle upgraded to quilted Nappa leather (R6 960). Spec-wise, the SQ5 bucks the Germans’ traditionally sparse trend and offers sat-nav, electric adjustment for the standard-fitment sports seats and three-zone climate control as standard. Of course, there is still a raft of options on offer if you’re keen to dip further into your savings.